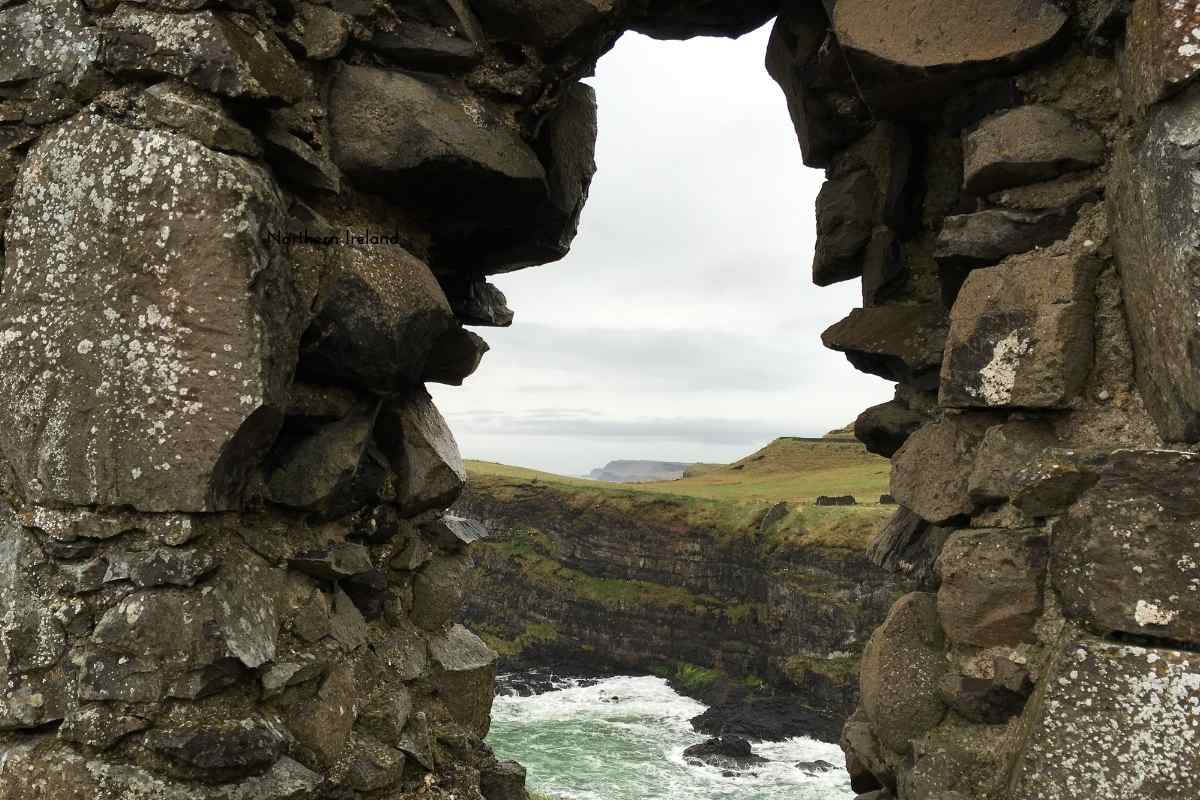 Northern Ireland is full of wonders and Country Antrim has most of them. There are so many cool things to do in Antrim, that it’s a must for any tourist!

One of County Antrim’s most famous sons, C. S. Lewis, said, “You can never get a cup of tea large enough or a book long enough to suit me.” Climbing up the hills of County Antrim in the rain & hail made us long for that cup of tea and book, which we could have been enjoying sitting next to the lit fireplace we left back at the hotel.

The day we headed out to the Giant’s Causeway – it didn’t look good for us to stay dry. We had come prepared, or so we thought, but Irish rain drops don’t fall straight down. You trick yourself into thinking the umbrella will help, but you might as well throw it in the bin, as you are sure to get wet anyway.

It is always exciting for me to be at the end of a country; literally one step and you are falling off into the sea. I felt this in Reggio Calabria, John O’Groats, Taormina. Now up at Dunluce Castle, our first stop on the Causeway Coastal Route and one of the world’s most glorious drives, we could see how this spot was the inspiration for C.S. Lewis’s Cair Paravel.

First built in the 13thC, Dunluce Castle showed us just how close we were to Scotland, for on a clear day you can see Islay. The first owners were the McQuillans in 1513 and then the MacDonalds took over, after that the MacDonnell- all of good Tartan stock, before they switched to the green.

Really, the main event of the Coastal Route is the Giant’s Causeway, a UNESCO World Heritage site and home to more than 40,000 basalt columns. A geological wonder for sure, but I love the myths surrounding its creation.

It always begins with a fight. This time it was between Irish Finn MacCool and Scottish Benandonner (Ben)– both giants. Finn built the causeway to cross the channel to find his foe. Now depending on whose side you’re on, one story says Finn won and the other that Finn hides from Ben as he realizes he is much bigger and would definitely lose.

Since we are in Northern Ireland, we will believe that Finn won and Ben flew back home, destroying the causeway along the way, never to see Finn again.

Whatever the story, it is amazingly beautiful, weird and wonderful, making it the top tourist attraction in Northern Ireland and one that should not be missed.

We were so lucky that the rain stopped for the two hours we were there and just started again as we headed for some whisky tasting and lunch.

One way to warm up in Ireland is by drinking the brown stuff and I don’t mean tea. Bushmills is the oldest whisky distillery in the world, in production since 1608. All it takes is barley, yeast and water and you have the liquid of the gods…at least as far as I am concerned.

What makes Irish Whisky different from Scottish is that the Irish don’t smoke it, so no peat here. A tour around the place and then a sample of their 21 year-old and I was warm again.

Bushmills is a sweet little town as well and the Bushmills Inn is the place to dine. We sat in the cozy warm dining room eating Guinness laced cheddar cheese!

Step On and Off the Rope Bridge at Carrick-A-Rede

It’s a 1k walk from the parking lot to the bridge but when the sun breaks through the clouds as it did when we were there, you don’t notice the walk. The landscape is absolutely stunning.

After crossing the bridge, a heart-racing feat in itself, make sure to look behind you as well as in front. You understand why it has become a destination – the scenery is just indescribable. We were offered this brief glimpse of sun and then the heavens poured down on us – hail this time.

One turn off the main causeway is a must. Don’t miss the sign from outside Ballytoy to Cushendun for Torr Head Drive. The roller-coaster ride of the area – which takes you through the closest point of Ireland and Scotland.

Eat the best steak in Europe

After a day in the rain, I ordered up a Pear Martini and then a big steak, not just any, but top purveyors Hannan’s salt-aged Sirloin. Slathered with garlic butter and accompanied by Parmesan truffle fries, the evening couldn’t get any better.

I met Chef Niall Mckenna at an event in London to promote Northern Ireland’s Food & Drink 2016. I will never forget what he did with a scallop, a food I usually don’t like. The moment my trip to Belfast was confirmed, I emailed him to let him know that I would love to eat in his restaurant. Alas, he was not to be there but was in Italy tasting charcuterie.

We chose to eat in his more casual dining establishment and it was just the perfect vibe for us after a perfect day of driving and battling the Irish weather.

NB: I was the guest of the Culloden Estate and Spa and Ireland.com. I can’t thank them enough for inviting me.

Everything I write is always my own opinion!