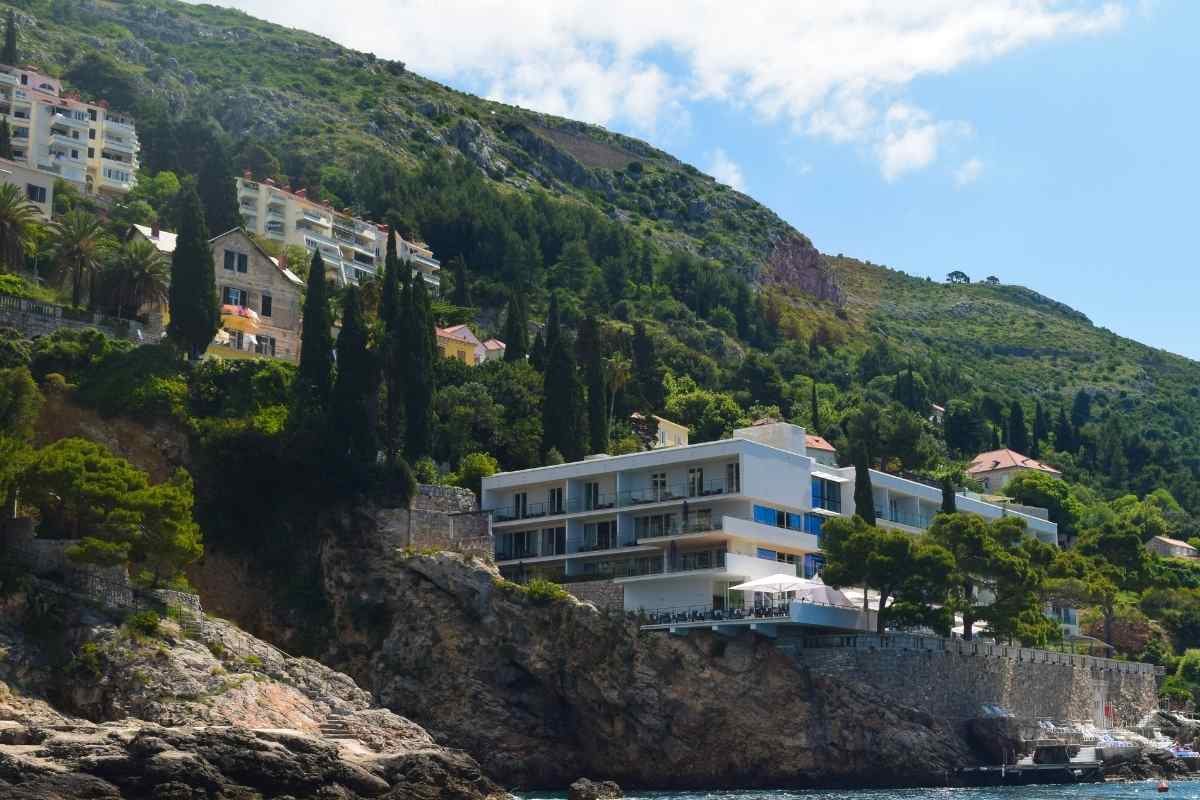 There is no such thing as a bad view at Villa Dubrovnik – how could there be? It sits atop a hill overlooking the Mediterranean and the charming jewel that is walled city of Dubrovnik.

Dubrovnik was once owned by the Venetians, need I say anymore? That may have been in the 1200s, but, for a Venice lover such as I, it means it has that touch of non lo so (that’s je ne sais quoi in Italian). The walled city is a member of UNESCO’s World Heritage Sites and remains almost untouched since the 15th century.

Zooming past the city centre, your first introduction to the Villa Dubrovnik is very James Bondian. An elevator door stands by itself, almost other-worldly popping out of the ground. The door opens and you are invited to descend by the helpful doorman.

Peering over the side to make sure Blofeld wasn’t below stroking his cat, I saw the incredibly modern, airy, luxurious entrance of the Villa inviting us down to settle in.

With a hotel where every room has a drop-dead view, you tend to immediately leave your bags where they were placed and head straight to the balcony. Which is exactly what I did. A threat of rain hovered above making the Med a bit choppy. The blues, the greens, the browns all felt turned up to decibel 11 and this was when the sky was partly cloudy – I couldn’t imagine how would it look in the sun?

If a few raindrops hadn’t awakened me from a dream-like trance, I would still be standing there transfixed. Coming back into the room, I knew I could be happy here – the essential down pillows, delicious smelling Etro amenities, plush robes and tons of towels. One fabulous item sitting on the desk made me so very happy – a set of electrical outlets for every type – American, European, and UK – I only wish every luxury hotel had this. No time wasted hunting for plugs and pulling out lamps to charge phones. More time for eating!

Lunchtime brought the rain but, although we couldn’t sit outside, there was no escaping the gorgeous landscape around us. Windows everywhere reminded us we weren’t in London any more.

Lunch at the Restaurant Pjerin was one yummy dish after another all partnered with local Croatian wines. The pasta….ah, the pasta, but more on that later.

Breakfast the next morning was served on the deck as the sun had finally arrived! I was almost about to say, “who cares what your food is like when you wake up in the morning and the sun is shining.” This breakfast you do care about…why do you ask, because it’s not a buffet. I almost got up and kissed the waitress when she handed me a menu. Scrambled eggs made especially for me – not in a communal vat getting harder and harder. Fresh baked bread, smoked mackerel to go with those eggs. What a joy.

Now let’s get back to the pasta. I know we are not in Italy, but you could have fooled me. If you are a pasta fan, which I am, you would be as happy as a vongole at Villa Dubrovnik. The pasta was divine, with fava beans, alla Norma, con riccio (sea urchin) to the sublime spaghetti pomodoro.

We could watch the chefs working their magic for our second lunch at the hotel’s Al Fresco Bar & Giardino.

They even let us taste a perfect Raviolo – how could something so small be so divine?

For those who can’t eat pasta, never fear, the gluten-free options were spectacular as well. It felt as if the seafood salad had jumped up from the Med into my plate!

The perfect thing about Villa Dubrovnik – it sits close enough to town that you can hop a boat and be there in five and equally it’s far enough away to feel like you’re on proper beach holiday.

Before the beach holiday began, we ventured into town to explore, jumping into the hotel’s chic Riva to get us there:

First-timers – immediately step into the main square and make yourself comfortable on the lap of Marin Drzic, then make a wish and pull his nose. Considered the finest Croatian Renaissance playwright, he also has the power to make dreams come true. After that’s done and dusted, explore – get lost in the tiny streets.

Loads to see and do – a 10 Best Bits of Dubrovnik is coming soon – wind your way through the windy streets and up staircases that seem to lead you over the walls and beyond. Wonder at the lovely silver button earrings that have remained symbols of the city for centuries and try not to trip over the Game of Throne devotees in search of Cersei sightings.

Walk the entire length of the city walls and, on a glorious afternoon, when the sun has peaked, find the bar hanging onto the wall and sit until it’s time for your massage back at the hotel.

Did I mention the spa? After an hour’s walk above the city, it was time to head back to hotel to enjoy it before departing.

After being pummelled in all the right ways, the pool was there to take a dip in, as the Med was just a tad too brisk for me, too early in the season.

Such a short plane ride from London to a world of poets, priestesses and princesses, Dubrovnik is a gem that should not be missed and there is only one place to stay.

See how the Royal Villa Mojito is made on my YouTube page!

NB: I was the guest of Villa Dubrovnik. It was absolutely perfect and I can’t thank them enough for inviting me.

1 thought on “Best Bits of the Villa Dubrovnik, Croatia”